Pulham, the name of the village where James Yeatman runs 320 dairy cows plus youngstock, means ‘Land of Ponds’, accurately reflecting the heavy Oxford clay soil. The ground is slow to warm up in spring and any rainfall lies on the surface. Turning the cows out depends on soil conditions and varies from year to year.

“It is very easy to poach our fields and we only graze when there is no risk of soil damage,” says James. “Last year in the long, cold wet spring, the whole farm was cut as silage first before the cows went out.”

James rents 98ha (240 acres) at Grange Farm from the Sherborne Castle Estate where the cows are kept. Eighty-one hectares of maize is grown elsewhere on the estate, which James buys to include in the cows’ winter ration.

Further land is rented for growing silage from Graham Crocker at neighbouring Manor Farm, home to Quill Productions, which manufactures products for the game bird industry.

The cows are robust, smaller-framed Holsteins, which produce 10,000 litres of milk a year from twice a day milking. The milk is sold to Muller.  James is a Tesco Sustainable Dairy Group scholar and recently travelled to New Zealand, Australia, Brazil and America investigating the welfare of indoor and outdoor dairy systems. 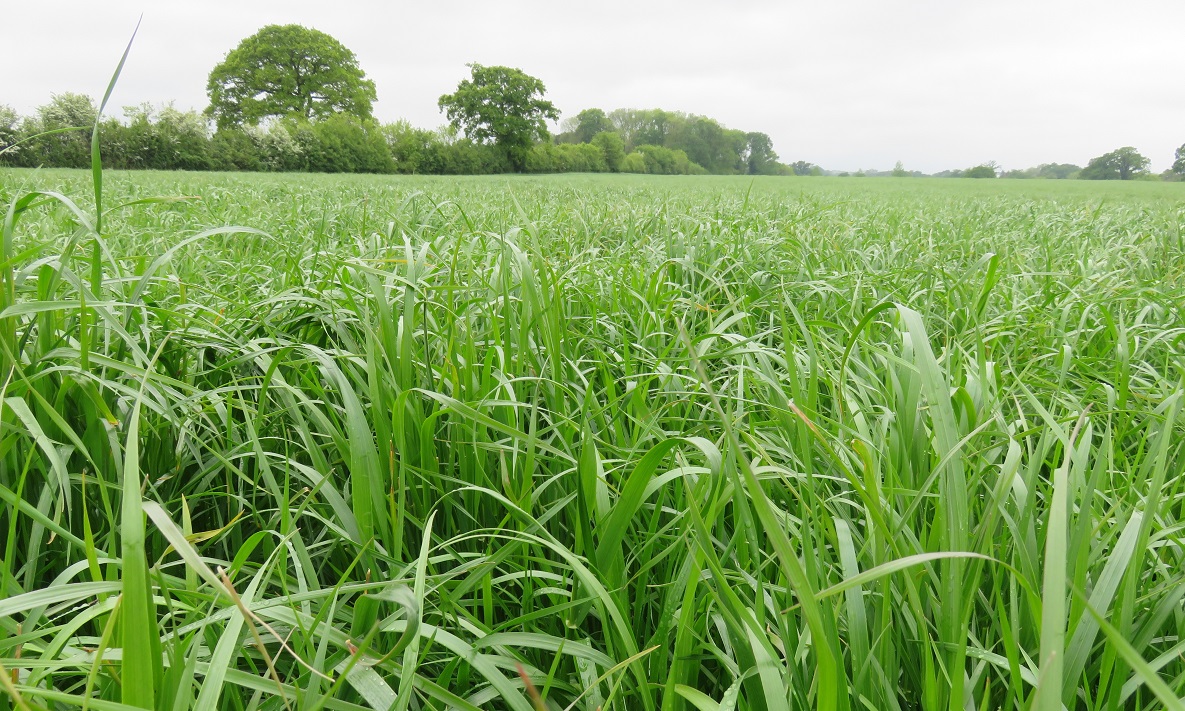 A trio of festuloliums cope well with heavy clay soil

The herd at Pulham block calves in the autumn during a tight nine-weeks and heifers are born in a four and a half week period. Sexed semen has been used on the top performing cows for the past 20 years, with the rest bred to an Angus beef bull.

James works with nutritionist Charlie King preparing a TMR from 50% maize silage, 30% grass silage and 20% wholecrop silage. A homemade pre-mix of straights and 4kg of soda grain is mixed into a Total Mixed Ration, which is fed fresh once a day. The aim is to provide enough energy and nutrients for the cows to peak at maintenance + 38 litres of milk.

Introducing festuloliums
Grass reseeding in the past has been as and when fields have needed it, with late heading perennial ryegrass and white clover mixtures favoured. But last year, in an effort to combat the wet ground conditions, James tried a mixture of DLF festuloliums – which are crosses between meadow fescue or tall fescue and ryegrass. This creates a combination of high nutritional quality from the ryegrass with good winter hardiness, persistence and stress tolerance from the fescue parents.

The mixture contained 5kg of Lofa hybrid festulolium, which has an extended grazing season and delivers high forage yields along with stress and disease tolerance. It is very deep rooting.

Along with this was 3kg of Hipast tall fescue festulolium, which after flowering stays in a vegetative state giving excellent ground cover – which can stand up better to poaching.

Finally 4kg of Perseus hybrid festulolium, which can tolerate flood and drought conditions and 3kgs of a red clover blend – to fix nitrogen, improve soil structure and increase the protein content of the silage.

This mixture was sown on a 5ha (13 acre) field after winter wheat. Slurry was applied after harvest and the ground was power-harrowed. The seed was sown using an Einbock grass-harrow seeder.

“We were lucky that it rained at just the right time at the end of the drought and it all came up,” says James. “That is the only advantage of having clay soil, once it gets some moisture – it holds onto it.”

Eight weeks after sowing, there was unexpectedly enough crop to take a cut, producing 30 bales of silage, which were wrapped and came in handy for winter feeding.

Growth continued through the 2018/2019 winter and 87kg/ha of nitrogen fertiliser was applied in spring. The first proper silage cut was taken on 19 April, yielding 15t/ha fresh weight.

“We have been delighted with the way this crop has grown and took a second cut on 24 May.

“Silage quality is paramount – we want quality forage, not a high pile of rubbish. We want to offer our cows the very best we can for their health and welfare – as well as for milk yield.

“It is still early days for the festulolium mixture but at the moment it is doing everything Mark Simes from DLF said it would! It seems to handle the cold, wet clay well and the heading dates fit in with the other ryegrass silage crops on the farm, so the contractor does them all at the same time. I shall be looking for four cuts this year and possibly some late autumn grazing for the heifers.”

This article was first published in British Dairying, July 2019