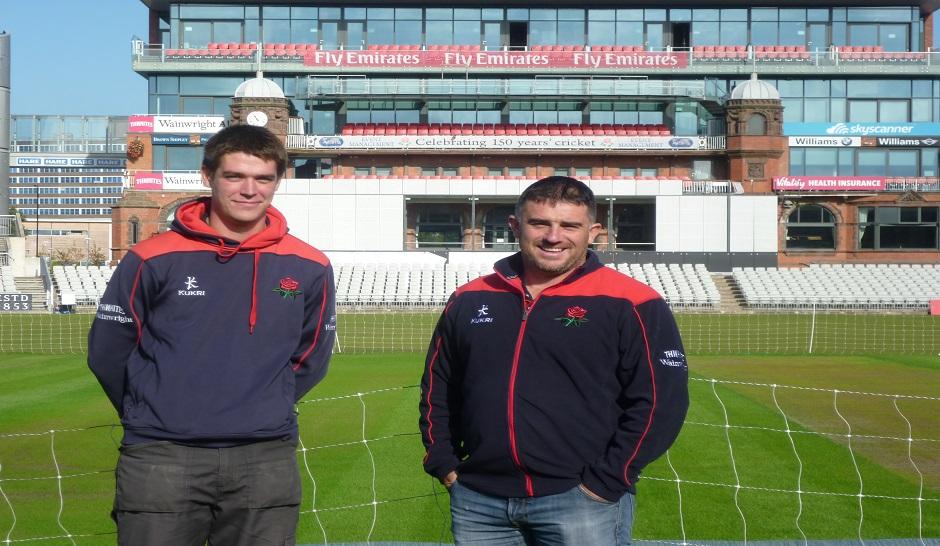 The seed trial was carried out on the practise area at Emirates Old Trafford on two wickets that had been in use for approximately 34 weeks. Number 2 wicket (67.12㎡) and number 4 wicket (69.33㎡) were prepared for renovation in the same way as any other wicket at the ground by close mowing, scarification and using a BLEC Uniseeder to punch 45mm holes into the surface (figures 1 and 2). The sowing rate for each wicket was 70g/㎡ which used around 5kg of each type of seed (figures 3 and 4). Once seeded the area was brushed and a light top dressing of Surrey loam applied which was then luted to level the surface before a germination sheet was placed on top.

The germination sheets were left in place for 5 full days for each wicket before only being used over night from days 6 to 10. Each wicket received 2.7mm of irrigation for all but 2 of the first 13 days after sowing with the 2 days missed due to heavy rainfall. Overall the weather conditions during the trial were ideal for growth with temperatures reaching the mid20s during the day and only falling as low as 1213 degrees overnight.

Fig 5: showing the early signs of root and shoot growth from the ProNitro seed

Fig 6: roots have began to develop but no shoots on the control seed at day 3

By the 6th day the Pronitro seed was growing well in all areas of the wicket including the bowling and batting footholes which are often heavily compacted making growth difficult. The control wicket at this stage was still showing sparse signs of growth with little evidence of progress in the footholes

By day 9 the Pronitro wicket was well established with an everthickening sward and good growth on all areas as figure 7 shows. The control wicket had also come on well although the sward was much thinner and the height much less than the Pronitro seed. The compacted areas of the control wicket were still struggling and there was a marked difference between the two seeds types which can be seen in figures 8 and 9.

Fig 7: The ProNitro seed has clearly established quickly and has a good colour

Fig 8: Sward density was good even in the compacted foot-hole areas of the wicket

Fig 9: Growth was less successful in the foot-holes of the control seed

Following the first cut after 14 days, the wickets were watered irregularly with rainfall being the main source of irrigation. Both areas showed signs of drought with the worst symptoms occurring in weeks 4-5 when each area lost its colour and growth was stunted. The control wicket was particularly affected by this, turning a rusty yellow colour with the Pronitro wicket turning a lighter green. Once recovered the control area regained its colour over a couple of weeks and the Pronitro remained consistent with good sward density and growth. (figures 10 and 11)

Fig 10: shows the ProNitro after the final asessment  Fig 11: is the control wicket

Steeped in history, Lancashire County Cricket Club was formed in 1864 and is one of eighteen first class counties within the domestic structure of England and Wales

Lancashire are the most successful one-day team in English cricket, founded on the side of the late 1960s and early 1970s that won the Sunday League in 1969 and 1970 and the Gillette Cup four times between 1970 and 1975. They won the Benson and Hedges Cup in 1984, before the ‘Team of the Ninties’ enjoyed a golden decade.

The 2015 season marked a successful year for Lancashire who returned to the first division of the County Championship whilst reigning supreme in the NatWest T20 Blast competition, beating Northamtonshire Steelback in a thrilling final at Edgbaston.