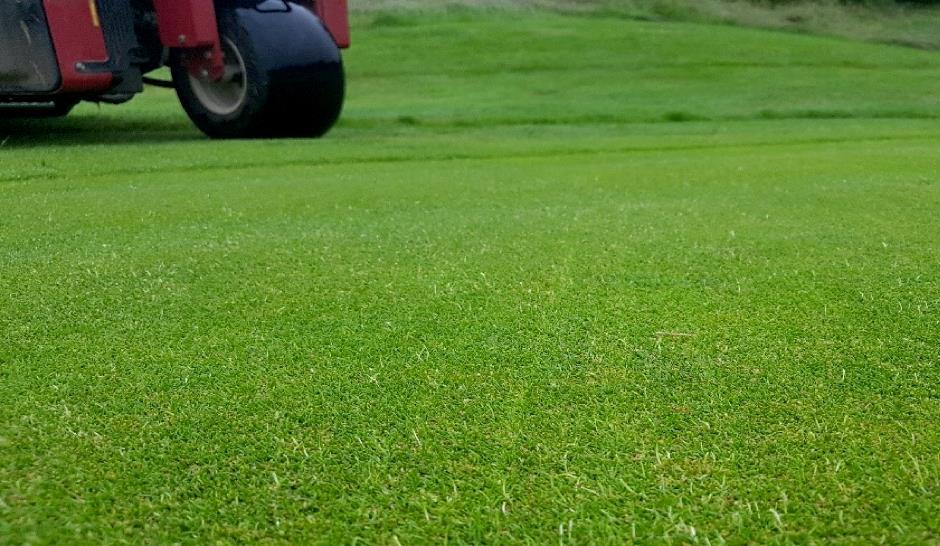 Now into the 3rd year of increasing the bent content of their greens, Wakefield’s Waterton Park Golf Club has achieved the biggest bent showing to date in 2017 thanks to the Johnsons Sports Seed J Nitro All Bent mixture. Head Greenkeeper, David Griffin, has maintained the course he describes as a ‘grass factory’ for the last 19 years and says, “it isn’t easy”.

The Parkland course is sited on the world’s first nature reserve created by Charles Waterton in 1820, but today it’s down to David and his team of six to shape the 245-acre site.  “We’ve been using bent grass for the last 3 years with the aim of trying to outcompete the Poa and achieve more sustainable surfaces – less disease, less water, less chemical input etc” explains David. “In 2017 we went with the ProNitro coated J All Bent seed and the results were significant. Within six days of our August overseed the seed had germinated and was showing, and by day eight we were cutting it!  It was unbelievable!”

Johnsons J All Bent contains 60% Arrowtown, the top rated browntop bent, and 40% Manor and sets a new standard for density and visual quality. The ProNitro seed coating focuses on improving nutrient utilisation during the early stages of plant growth. It contains a combination of both fast acting and slow release nitrogen to deliver stronger establishment, more plants and an increase in root mass resulting in a healthier sward.

“We have trialled other seed in the past, but it was John Hughes at DLF who recommended we try the coated seed and I don’t think we’ll be going back. As well as the performance benefits, it saved us putting a pre-seed fertiliser down, saving both labour and money.” David is also using the coated J Nitro Tee mixture around the course which has delivered good coverage in under 3 weeks.

Final word from David, “Embarking on a bents programme takes hard work and dedication over a number of years to get it right, but if you persevere, you’ll stand in much better stead when it comes to things like disease that can end up taking a whole green out. With the products out there now to help turf managers, likeProNitro, it makes the tasks that bit easier.”

This 200-acre scenic course is set within the historic Charles Waterton Estate, providing panoramic views over the parkland the lake and the hotel. The course designer, Simon Gidman, has fully exploited the superb natural landscape, creating tree-lined fairways and protected greens. The quiet and secluded location of the course makes it an ideal place for the peaceful pursuit of golf. Since its opening, this 18 hole, par 72 course has rapidly gained a reputation as one of the North's leading golf venues.